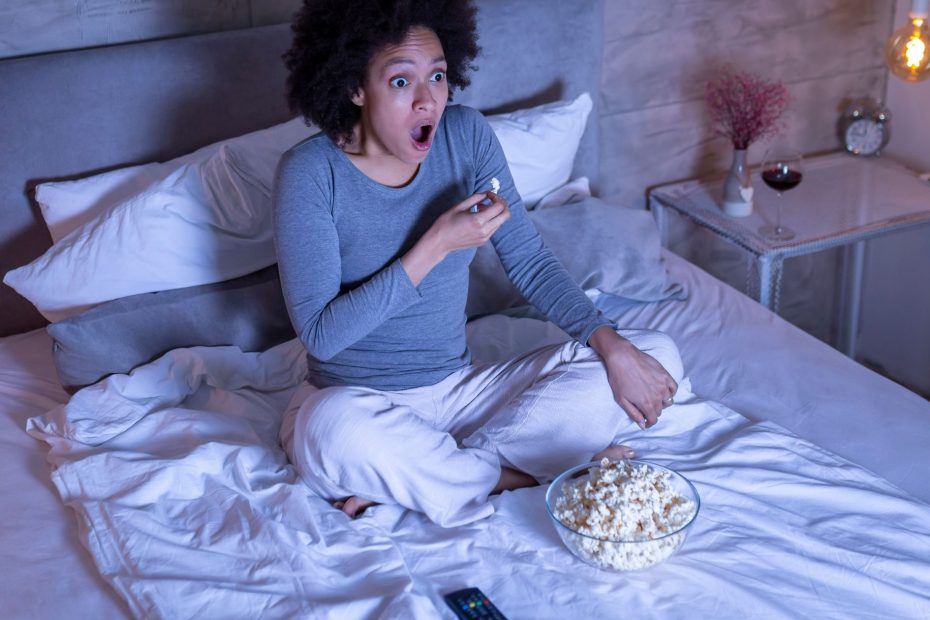 Love a show filled with twists and turns? One that keeps you guessing right up to the end? Here are 3 of the best and most unpredictable shows to binge-watch. And surprise! None of them was filmed in Hollywood.

We’ve all been watching a lot more tv than we used to, am I right? Before the COVID virus struck, I wasn’t a big tv watcher. Now it seems to be an almost nightly event to work our way through two or three episodes of the same show until eventually, we’ve seen every episode.

Can we say I’ve become a Binger?

Are You Looking for Something Fresh on TV?

It only stands to reason that after a while, it seems like you’ve seen everything on the major networks.

Sometimes different shows seem to merge together until you feel like you’ve seen them all whether you have or not.

Names and plots don’t stand out anymore, they all seem like the same show.

But, wait! Hit me over the head for being a dunce, but once we started looking for shows made outside of the U.S. – suddenly we found a tremendous untapped resource for binge-worthy shows!

I have to admit, I have been prone to the faulty thinking that everything entertainment-wise comes from Hollywood. But almost every country creates its own unique tv shows, and so many of them are really, really good!

For example, the three below that I’ve just recently finished watching are from Scotland, Wales, and Spain. And although very different, I really enjoyed all three of them!

This first show is really more of a mini-series, as it has just four episodes total. It’s set in the most charming Scottish town.

This who-done-it mystery will keep you questioning not just who the perpetrator is, but why the crime occurred in the first place!

The plot: Tom and Kate Kendrick seem to be leading perfect lives with their three little girls, beautiful country estate, and best friends. These friends, Steve and Jess, are navigating a serious relationship of their own.

When tragedy strikes, we learn new details about each of these key players, as well as other significant figures in the town, such as relatives and co-workers.

But what really happened, and why?

The series focuses on how the community responds to the tragedy – and mystery – that is laid out before them, and the secrets buried deep within every individual and in every relationship.

There is some dark material here, and yet you will find yourself drawn to and really caring about most, if not all, of these well-constructed characters.

Deadwater Fell is available on Acorn Streaming Service (which we got as a 7-day free trial through AmazonPrime.)

Wales is a creepy, creepy place.

That’s the first insight you will get when you watch this show.

And while that is probably not at all the reality, the grey skies, deserted moors, and dreary villages depicted in Hidden will definitely make you think twice about visiting. Not to mention, there’s one truly terrifying farmstead.

There are two seasons of this detective drama. The investigators and key characters remain the same, but each season focuses on a separate crime. Season one is eight episodes long, and season two has six episodes.

In both seasons, we are first introduced to a number of characters, their stories are woven through the backdrop of this lonely part of Wales. At first, we just get to know and care about these individuals, as we are drawn into the stories and learn who is the victim, and who is the criminal.

Over the course of the season, we see the stories come together as a compelling whole.

Are You Ready to Shape a Happier Life?

My FREE Guide will show you how - in 21 Simple Steps!

Thanks so much for subscribing!

Check your inbox for an email to confirm your address.  I want to be sure to send your guide to the right place!  As soon as you confirm, your guide will be on its way to you.

Our heroine in this show is DI (Detective Investigator) Kadi John, a solid, capable officer who has returned from the city to her childhood home to help care for her ailing father. We see enough of this character’s personal life to understand much of her behavior, professionalism, and stoicism. We get to see a fully-fleshed-out human being behind the badge.

John’s assistant is DI Owen Vaughan, who clearly respects Kadi and her abilities. They make an excellent team. Thankfully (to me at least) there is not even a hint of romance between these two. They are professionals and friends. Personally, I hate when shows have gratuitous romantic tension between two co-workers as if that is the only way members of the opposite sex can relate.

“Bella Ciao, bella ciao, bella ciao ciao ciao”…just trust me, you’ll be singing and humming those words on repeat once you dive into this thoroughly engrossing drama (with plenty of humor!).

The story that unfolds is of a criminal mastermind and his collection of eight thieves that take hostages and lock themselves in the Royal Mint of Spain to carry out one of the most unique capers of all time.

The twists and turns come fast and furious, as this team outwits the police time and time again.

Wikipedia gives an excellent synopsis, “Set in Madrid, a mysterious man known as “The Professor” recruits a group of eight people, who choose cities for code-names, to carry out an ambitious plan that involves entering the Royal Mint of Spain, and escaping with €2.4 billion. After taking 67 people hostage inside the Mint, the team plans to remain inside for 11 days to print the money as they deal with elite police forces.

In the events succeeding the initial heist, the group is forced out of hiding and find themselves preparing for a second heist, this time on the Bank of Spain, as they again deal with hostages and police forces.”

What isn’t mentioned here is the fully-developed characters, twisted storytelling, complex relationships, and sophisticated humor sprinkled throughout this 4-season show.

It’s a lot of fun to watch, and best of all – there’s a whole new season coming out next year!

Final Thoughts on 3 Unpredictable International TV Shows (You Must Watch!)

Do any of these sound worth watching to you?

I’d love to hear your opinions on them, and if you enjoy watching them as much as I have.

I’ve certainly learned that it’s a good idea to look past our standard American tv fare now. There is a whole world of entertainment out there, waiting to be discovered and enjoyed!

2 thoughts on “3 Unpredictable International TV Shows (You Must Watch!)”